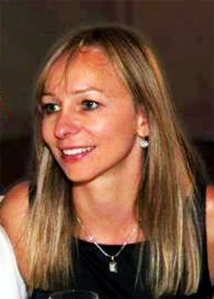 Natasha was born in Ukraine, one of the former Republics of the USSR. Her home city, Uzhgorod, is located in the southwestern part of Ukraine, bordering Slovakia and Hungary. It is over 1100 years old!

In her first year at the Uzhgorod State University, while double-majoring in Finance and English, she won a sister-cities scholarship to Oregon State University. In 1991, she went both as an exchange student to OSU, and as the first sister-cities representative to Corvallis. There, a couple of years later she met Nick, whom she married.

In 1996, Natasha received her degree in Occupational Therapy at the University of Puget Sound. Her clinical interest is in Hand Therapy, and she specializes in helping people recover from various hand and arm injuries. She loves making functional hand splints and braces, often necessary during initial stages of rehabilitation.

Among her many administrative duties as a shareholder at Nick Rinard Physical Therapy, Natasha is responsible for the Finance Section of the organization.

Her recreational sports are skiing and running. She enjoys good coffee & great food, and thinks that American wines are the best in the world. She also likes fashion, movies, her laptop, iPhone, and Amazon Kindle. She loves to read, travel, and most of all–to spend time with friends and family, especially her baby daughter, Nina.