I recently had a follow up appointment with a patient of mine.  “Sam” came to our clinic after having failed attempts of treatment from standard Physical Therapy and chiropractic care.  His past physical therapist had given him generalized stretching with little to no benefit, and by the time I evaluated him, Sam admitted that, “(he) was not impressed with his therapy treatment.”  He had heard about Nick Rinard Physical Therapy, and he was hoping to get the results he desired with us.

During his initial evaluation, Sam presented with limited, painful movements in several motions of the shoulder. The most painful motion was the motion of putting the arm behind him (like he was going to scratch in between his shoulder blades).  Incidentally, this was also the motion which initially caused his pain three months ago. 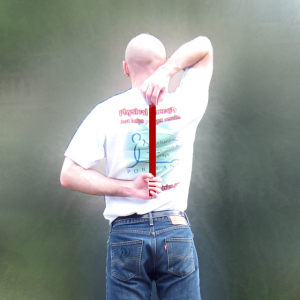 I had Sam passively stretch into the painful motion. This was not a random decision. It was a clinical decision based off of his baselines and has been clearly documented and researched by the works of Mark Laslett.  As Sam repeated this movement, the pain dissipated and all of his baselines improved.  Sam continued to perform this exercise until his next visit, at which, he reported 95% improvement.

Sometimes the exercise required to fix the mechanical problem is counterintuitive (moving into the pain).  A trained mechanical therapist is able to recognize these pain patterns and can make a clinical decision as to what exercise should be performed and interpret the results.