All posts by Megan Plante, DPT

The most common cause of vertigo (dizziness) is benign paroxysmal positional vertigo (BPPV) and it is a mechanical disorder. A trained clinician can evaluate and treat this condition based off of the patient’s symptoms. The evaluation consists of moving the head into specific positions. Symptoms of BPPV include vertigo with change in head position, nausea with or without vomiting and disequilibrium (poor balance).

BPPV is a curable condition affecting the vestibular system (inner ear). Your inner ear is comprised of 3 semicircular canals (SCC) and 2 otolith organs. These structures detect head movements (acceleration). Crystals called otoconia are embedded in the otolith organs. Sometimes, the crystals can become dislodged and misplace into the semicircular canals. The misplaced crystals result in increased sensitivity to head movements.

Hopes for a Positive Response

I was treating a patient for low back pain when she mentioned that she was experiencing severe episodes of dizziness. I informed her about BPPV and mentioned that the treatment was very simple and effective. She agreed to have an evaluation in hopes for a positive response.

My patient tested positive for BPPV utilizing the Hallpike-Dix test for the left semicircular canals. I also performed a few other tests and exercises to rule out other potential causes for symptoms. Once we had our diagnosis of BPPV, the treatment was very simple.

Improvement in just one week

I took my patient through a series of head movements that reposition the crystals back into the otolith organs (the saccule and ultricule). After performing the repositioning maneuver, baseline symptoms were decreased and she returned the next week without having any severe episodes of vertigo.

BPPV – A Common Vertigo that is Easily Treated

BPPV is the most common cause for vertigo. Luckily, it is very easy to diagnose and treat with a trained therapist. If you or someone you know has vertigo as a result from head movements, have a physical therapist evaluation so that you may start feeling better today!

Up to 80% of the population will experience low back pain (LBP) at some point in their adult life (Croft et al 1997).  It is estimated that health care costs for low back pain are larger than for any other disease for which economic analysis is available (Maniadakis and Gray 2000) ($31 billion/year).  There is little to no evidence supporting the use of traction, thermal modalities, or electrical stimulation for the treatment of LBP. Unfortunately, these strategies are commonly used for the bulk of LBP treatment.   Many studies conclude that the McKenzie method of evaluation and treatment for LBP is superior to that of standard treatment (general stretching and strengthening).  What makes the McKenzie approach different is its classification system. Based off of symptom response to repeated lumbar spine movements, patients are classified into 1 of 3 syndromes (derangement, dysfunction, postural).  After patients have been classified, their individualized treatment plan is created. The McKenzie method also emphasizes self-treatment and long term symptom management.  I consider this the most valued aspect of treatment, as statistics show LBP is recurring in nature. Let’s review a case of a patient with a very successful outcome utilizing the McKenzie method.

Patient presented to therapy 2 weeks after the onset of LBP with bilateral leg pain.  Patient described sharp pain which radiated down to the left foot and down to the right shin. Symptoms started after a weekend of working (auto mechanic) which involved repetitive bending and lifting of heavy equipment. Patient rated worst pain as an 11/10 for the back and a 10/10 for the left leg, occurring on a daily basis.  Patient was severely limited with walking, sitting and sleep.

Patient demonstrated pain with all lumbar spine motions in standing.  There was no neurological (strength, sensory, reflex, neural tension) deficit.  This is important to test when there is a presence of leg pain.

Patient was given prone press-ups to be done every hour until his follow up appointment.  The next day, the patient returned to the clinic happily reporting that he had not experienced leg pain in over 24 hours!  The patient was even able to perform tasks associated with moving into his new home that weekend.  In 2 weeks his back pain rating had decreased to a 3/10 and he was experiencing little to no leg symptoms!  Patient continued therapy over the next few months with exercise progressions and modifications as needed.  At discharge, patient was able to perform his duties as an auto mechanic and continue his training as a member of the National Guard.

HAVE A MECHANICAL EVALUATION FOR YOUR LOW BACK PAIN:

Do not fall victim to chronic low back pain.  This is associated with huge healthcare costs, over utilization of medication and surgery. All of which would otherwise be avoided with a simple exercise, requiring no special equipment.   The patient from this week’s case left the clinic feeling very empowered by his own ability to treat his symptoms and was no longer considering having major spine surgery. 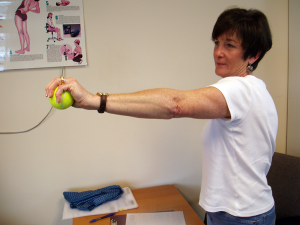 Lateral epicondylitis, more commonly known as “tennis elbow,” is a pathology that is familiar to physical therapists and the general public.  What is lesser known is “pseudo tennis elbow,” a mechanical problem with a very simple solution!  Unfortunately, therapists whom are not familiar with the utilization of mechanical diagnosis may unknowingly miss this common elbow derangement.  As a therapist practicing the McKenzie method of mechanical diagnosis, I have diagnosed BOTH of my current elbow pain patients as derangements (or pseudo tennis elbow).

Our patient, “Jane” presented to therapy with intermittent right elbow pain, worsening over the last 3 months. Jane reported difficulty with gripping, lifting, carrying and global limited function of the right arm.  Jane described symptoms as “variable” meaning she could perform a task that produced his elbow pain. Then, perform the same task or movement again without experiencing any pain at all!  This variability of pain is the hallmark of a derangement and should not be misdiagnosed as a tendonitis, which would indicate inflammation (in which case pain would be constant).  Jane rated worst elbow pain as a 6/10.

Objective findings included pain with passive elbow flexion and extension as well as pain with active wrist extension and with gripping a tennis ball.  Because of my experience as a mechanical therapist, I am familiar with a technique called a mobilization with movement (MWM), developed by Brian Mulligan (a colleague of Robin McKenzie).  The mobilization provides a lateral force over the ulna at the elbow joint. While the patient applied this force, she was able to grip the tennis ball PAIN FREE!  This same technique was applied for other painful baselines and achieved the same results of ABOLITION OF ALL PAIN!  This ability to turn symptoms off with a mobilization indicates an elbow derangement and the MWM is used as the treatment strategy.

Jane was asked to perform the MWM utilizing the lateral glide while gripping a tennis ball to be performed 10-20 times every hour.  The theory is that this mobilization is repositioning the joint in order for it to articulate correctly, resulting in improved range of motion and strength after.  Jane returned to the clinic the next day with reports of at least 25% improvement! Objective findings were retested and nearly all baselines had improved in less than 24 hours!  Jane returned 1 week later and reported an 85% overall improvement with symptoms.

Get Your Own Mechanical Assessment

Don’t be misdiagnosed! Straightforward pathologies which require one exercise to treat are commonly missed with standard treatment.  This results in extra therapy visits, and more of your time and money.  It is worth your time to see if your pain has a MECHANICAL component.  A simple solution may otherwise be missed.